Senior Traditions Revamped in the Age of COVID 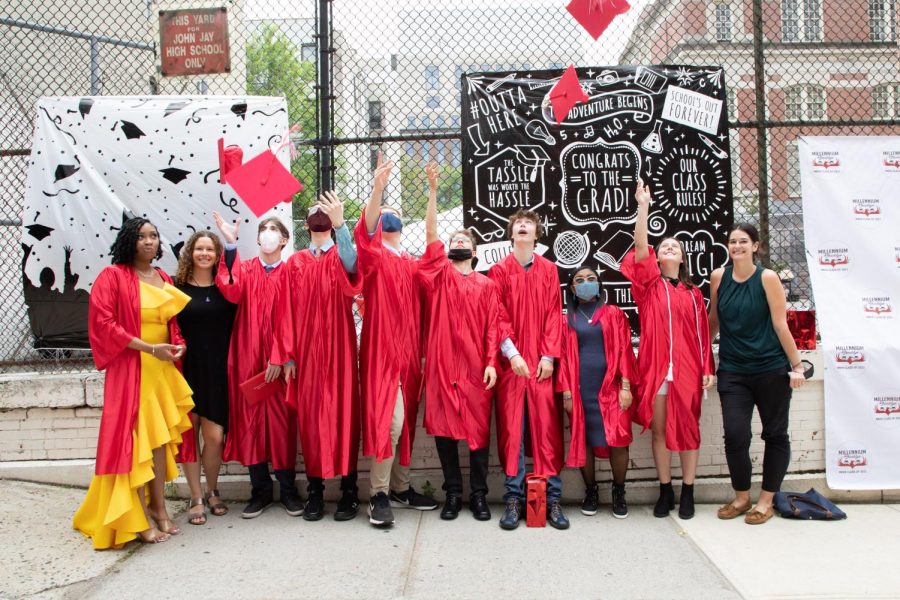 Senior year for last year’s graduating class at MBHS was a rough one. In addition to attending school remotely for the final months of high school, the Class of 2020 missed out on traditional rights of passage like Senior Breakfast, Senior BBQ and Prom; last year’s seniors had to attend graduation virtually and received their diplomas and caps and gowns via special delivery.

After spending the majority of this academic year attending school remotely, this year’s seniors worried that they too might miss the special events that mark senior year. “I feel like I’ve worked so hard these last few years and I was really looking forward to having a year where I can celebrate it,” said Abigail Manoylo. “Having senior year virtually is a hard way to make the most of it.” Fellow 2021 grad Delsina Kolenovic worried that she and her peers would miss out on “this hyped up year that teen movies present.”

And school did wrap with a semblance of normalcy for this year’s graduates. The MBHS faculty, spearheaded by senior advisor Ms. Rogan devised ways to make some of the typical traditions a reality for the Class of 2021. While senior breakfast and prom were cancelled, students had the chance to collect their diplomas in front of family at scaled-down in-person commencement ceremonies on June 12th. Graduation was not held at Brooklyn Tech as in years past, but was conducted in the John Jay courtyard. In advance of commencement, Wong acknowledged that “it’s a little disappointing” to not have a full-fledged graduation, “but I am glad to be having something of a ceremony.”

Principal Conway presided over five back-to-back in person commencements Saturday, with paired advisories convening in the courtyard in their caps and gowns under a white tent. Each student was permitted to bring up to two family members. Graduating senior Noah Hubel lamented that “my brother wasn’t allowed to come even though I had risked my perfect attendance record to attend his middle school graduation.”

Mr. Conway and each advisor delivered brief remarks to commemorate the occasion. Ms. Demakis, who left Millennium at the end of last year, even reappeared to send off her advisees. “As someone who left our advisory first, I’ve had a sneak peek at what it feels like to move on and be away from you–and it turns out, it’s hard,” she declared in her speech. “It was such a wonderful experience watching you grow up (and growing with you) and, through it all, I lived getting to know all of you.” Ms. Ciocca encouraged her social justice-minded advisees to “continue asking…world-changing questions, and continue taking action grounded in empathy, love and healing.” Roll was called for each group and students received their diplomas and a personalized award.

Graduate Oisin Moore shares that his “advisory lined up in the street and we tried to do the High School Musical jump and get some pictures. So that was fun.” Tommy Keaney noted that “people in my advisory liked the smaller ceremony. It was more personal getting to see your advisor give a speech.”

In addition to the in-person graduation, seniors celebrated with a virtual ceremony the Friday before. Kaspar Tapper kicked things off with a guitar rendition of the national anthem, while Naya Mack and Mikayla Guitierrez sang “Lift Every Voice and Sing.” In a pre-recorded speech, solutitorian Rachel Boniche expressed the sentiments of many, stating that “it has been a difficult year but we have been able to shine through the hardship.”

Commencement speaker Mr. Kodilla reminisced about his students devising a secret handshake and making “absurd arguments about the supposed merits of the Star Wars prequel movies.” In his remarks, which he made while holding a portrait of himself painted by Brys Perlata in front of his face, distributed one last assignment to the senior class: “Go! And be a good human. There is no assignment guideline sheet,” he stated. “I have no rubric to give you…I’m not the one grading it…No one is grading it…I don’t know what the due date is, but you should probably start working on it immediately.”

In his address, valedictorian Carter Perry shouted out “our teachers and principal [who] tried to create some sense of normalcy through it all. They taught us under unprecedented conditions.” He made light of the social distancing conventions that the school instituted, such as hallway arrows which dictated directional movement of students. “Personally, I don’t know what’s more absurd,” he said. “Asking students to walk all the way around the floor to get to a class only two feet away, or the fact that I did it.”

In another win for the class of 2021, yearbook distribution looked like it has in the past, with in-building students receiving their yearbooks in advisory and seniors able to sign each others’. Inspired by the fact that we have been physically separated, the yearbook staff decided to make the theme of this year’s edition “connectivity” as a commentary on how students are staying connected through virtual and digital means. Accordingly, pages in the book reference social media platforms and visual effects from the Matrix movies. And this year’s seniors had the opportunity to put their mark on the yearbook in a whole new way as they have custom designed their own portrait pages.

Parents have planned an unsanctioned senior barbecue in Prospect Park to take place this Friday. “I, much like the seniors, am disappointed that things aren’t back to normal yet and that [some of the typical] MBHS traditions are put on hold for another year,” ssys Ms. Rogan. “But this senior class is spirited, creative, and resilient. The in-person graduation event, although small, allowed them to have a special moment they deserve.”