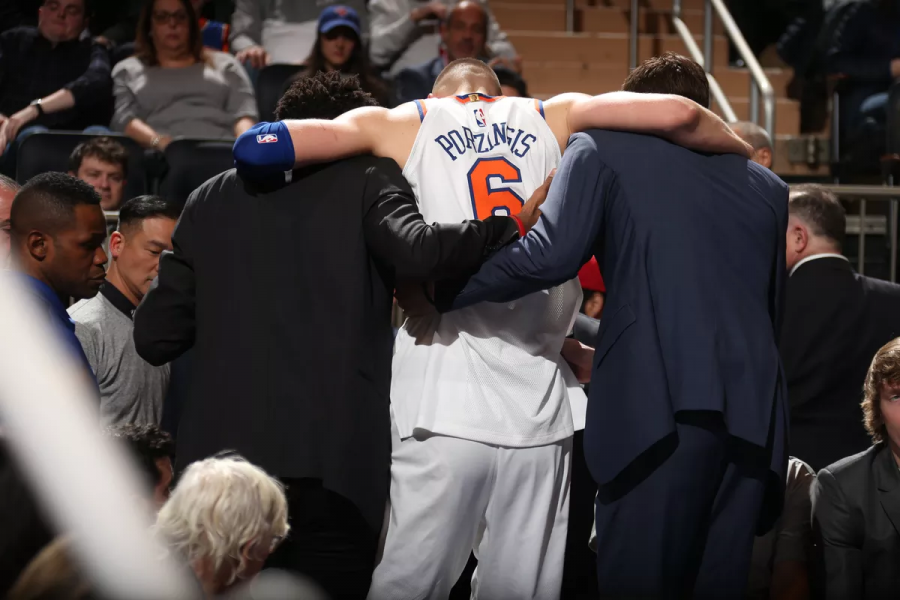 Injuries have been a frequent occurrence in the NBA during the 2017-18 season. It seems that every week a player suffers a severe injury, usually putting their season to an end. The injuries are often gruesome and have put multiple teams at a disadvantage in the race to the playoffs.

Kamil Wisniewski, an MBHS senior who constantly keeps up with the NBA, said “injuries ruin the game, as a fan, it is hard to watch your favorite player go down. It happens too often and players need more rest.” Wisniewski brought up an intervention, in the form of giving players more rest. NBA players’ bodies are under constant stress, especially without getting enough rest before their next game. Frequently, there are stretches where players are forced to play 3 or 4 games a week. Since basketball is such a high intensity contact sport, the players muscles get fatigued, leaving them at an increased risk of injury.

This has been the case with many NBA stars, such as Kristaps Porzingis. Porzingis was forced to go on a long stretch of games, causing him to tear his ACL as a result of constant stress being put on his body. This is only one example out of many during the 2017-18 season.

Bartek Lyczko, a Brooklyn College Freshman said, “injuries are part of the game. Players are putting all of their effort into games and unfortunately, it is leading to many injuries.” Lyczko has been following the NBA for almost his entire life. He believes that injuries are just a sign of the players’ hard effort to do whatever they need to for their team to win. Lyczko’s idea is a large reason why nothing has been done to address the issue of injuries in the NBA. It is widely believed that injuries are just part of the game, and giving players more rest would cause many franchises to lose money as a result of less tickets bought and less watch time on their games. There are barely any articles that focus on the idea of NBA injuries and what can be done against them.

The NBA owners themselves do not support the idea of NBA giving players more rest time. According to CBS Sports, Adam Silver, the NBA commissioner, acknowledged that there is a fine line between fatigue and player injuries. However, NBA owners complain that they will receive less revenue and less fans as a result of having less games in a season.

There has not currently been a solution to the occurrence of constant NBA injuries. There is a stalemate between NBA fans, owners, and the commissioner. This is a tough issue to address and most likely won’t be changed anytime soon. NBA players just have to keep going out every night and playing their heart out for their teams, praying that they don’t face a gruesome injury.