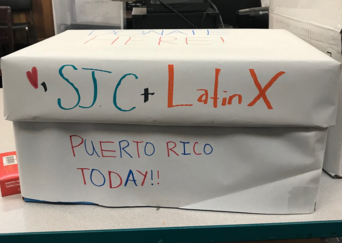 Brooklyn, N.Y. – On September 20th, Puerto Rico was fully engulfed by the category 5 Hurricane Maria. The 155 mph winds killed 48 citizens, made clean water inaccessible, destroyed houses, and caused the power to go out on the whole island. According to the New York Times, Governor Ricardo A. Rosselló of Puerto Rico called the situation a “humanitarian crisis.” Many celebrities and people around the world have gone to Puerto Rico and have donated to help the citizens survive. In MBHS, Latinx and Social Justice Club have come up with a plan to have MBHS students reach out and donate to Puerto Rico.

Many of the students in Social Justice Club wanted to help Puerto Rico and other Caribbean islands that were affected by Hurricane Maria. Ms. Davidson, 9th and 12th grade Art teacher and Social Justice Club organizer, said that in addition to gathering donations, “…we want to develop a critical awareness campaign that helps the MBHS community understand the political and economic injustices that exacerbated the impact of the hurricane.” Social Justice Club united with Latinx Club and Mr. Hamilton’s advisory, who were also interested in beginning to take action towards helping Puerto Rico.

In order to collect donations, there will be donation boxes in Ms. Beato’s room and in the main office where students can donate canned food, supplies needed by children, batteries, first aid supplies, and feminine hygiene products. Ms. Beato, 11th grade Spanish teacher and Latinx organizer, said that Latinx is “hoping to host an event where all students can participate and donate, like an outdoor party and sell food” in order to raise money. Both clubs are working with two organizations, one being UNICEF, that has a package where one donates $28 and they send specific items to Puerto Rico. The other being local Puerto Rican organizations that Mr. Hamilton is in touch with. The donation boxes will be made by Friday, October 20th and are open to all students and staff.